The expansion of renewable energies is the key to achieving climate neutrality by 2050. One of the most important legislative measures to increase their share in the European Union’s energy mix and a centrepiece of the Fit-for-55 climate package is the revision of the Renewable Energy Directive (RED).

Alongside electricity from solar, wind and hydro power, sustainable renewable fuels such as carbon-neutral eFuels will speed up the phase-out of fossil fuels and thus significantly reduce greenhouse gas (GHG) emissions. To unlock their full potential, a revised Renewable Energy Directive needs to set clear incentives for investment in their large-scale production and create a level playing field for all relevant emission reduction technologies.

The level of ambition in the current Renewable Energy Directive is insufficient to significantly advance the decarbonisation of our economy. A revised directive will have to set both a higher overall target and more ambitious sector-specific objectives for renewables by 2030 to meet the EU's climate goals, with clean hydrogen and eFuels playing an important role.

Expressing the overall renewable energy targets for transport in terms of GHG intensity reduction is a more effective way to promote the deployment of sustainable fuels with the greatest CO2 saving potential than the current energy-based RED targets. As part of a consistent EU climate strategy, we recommend setting a GHG intensity reduction target of 20% in the transport sector by 2030.

To ramp up the supply of eFuels across the entire transport sector, we recommend setting an ambitious but realistic sub-target of at least 5% by 2030, exclusively for so-called renewable fuels of non-biological origin (RFNBOs) – a term that includes both renewable hydrogen and hydrogen-derived synthetic fuels. In addition, an interim RFNBO target of at least 2.6% by 2028 should be introduced to trigger immediate investment in large-scale production of eFuels and facilitate meeting the 2030 target.

Multipliers, statically inflating the share of renewables energies in road transport, should be removed, as they do not lead to real emission savings. This also applies to the ‘hidden multipliers’ introduced by the European Commission when calculating the GHG emission savings of electric vehicles in road transport. Since both green electricity and renewable fuels replace the use of fossil fuels in internal combustion engines, the same fossil fuel comparator should be applied for all energy carriers.

Even if we succeed in significantly expanding our renewable energy facilities, large parts of the EU will continue to rely on energy imports. And this is where eFuels come in: eFuels can be produced in sparsely populated regions around the world with excellent wind and solar conditions for the generation of renewable electricity, and then shipped to Europe via an existing infrastructure to provide stored renewable energy in the form of climate-neutral liquid or gaseous synthetic fuels.

Fraunhofer Institute for Energy Economics and Energy System Technology (Fraunhofer IEE) has explored the potential for producing green hydrogen and climate-neutral synthetic fuels outside the EU in their global PtX Atlas. According to their study a total of 85,000 to 88,000 TWh of climate-neutral synthetic fuels could be produced outside Europe. By comparison, global energy consumption by transport in 2019 totalled 33,603 TWh. This means that even if we were to tap only half of the total global eFuels potential, we could make the world transportation sector climate-neutral and there would still be sufficient quantities of eFuels available to be used in other sectors across the globe.

Renewable fuels such as eFuels are the only way to integrate the existing vehicle fleet into climate protection efforts and speed up the decarbonisation of transport. They can easily be blended with conventional fossil petrol, diesel, kerosene or maritime fuel, and even replace them completely in the long term. Alongside the market ramp-up of electromobility, eFuels provide an additional climate friendly option for road transport. For example, an EU-wide blending of just 5% eFuels to conventional fuel, would result in a saving of 60 million tons of CO2 – equivalent to taking 40 million cars off the road for an entire year. This is essential to meet EU climate targets, as a big part of today's more than 300 million vehicles with an internal combustion engine (ICE) will continue to dominate our roads for many years to come. Without ambitious RED targets for sustainable renewable fuels, these vehicles will continue to run on fossil fuels.

The investment and job potential along the value chain of synthetic fuels is huge. Ramping up the production of eFuels by setting an ambitious sub-target for green hydrogen and hydrogen-derived products will make a significant contribution to generating long-term, sustainable growth while meeting the EU climate targets. According to recent studies, the European economy could benefit from EUR 80 billion in additional annual value added by producing so-called Power-to-X (PtX) equipment and plants, and exporting them to regions with excellent wind and solar conditions for large-scale production of eFuels. At the same time, the production of PtX technologies could create up to 1.2 million jobs in Europe.

The EU has the chance to position itself as a frontrunner in the production of sustainable technologies. With demand for PtX technologies expected to multiply, it is crucial for European electrolyser manufacturers to secure market shares now and establish themselves in regions with high production potential. However, the EU must create appropriate incentives for investment in eFuels production as soon as possible if it does not want to lose these markets to non-European competitors such as China and Japan.

eFuels can play an important role in turning harmful CO2 emissions into valuable raw materials: By capturing carbon dioxide from the atmosphere or from industrial point sources and then synthesising it with renewable hydrogen, climate killers can become climate-neutral alternatives to conventional fossil fuels. But the EU Commission wants to ban the use of industrial CO2 emissions from 2036, which would immediately discourage forward-looking companies from investing in industrial CO2 capture.

Instead of simply releasing unavoidable CO2 emissions from industrial sites such as the cement, steel or glass industry into the atmosphere, we recommend that eFuel production plants that came into operation before 2036 may continue to recycle and reuse CO2 emissions. This will benefit everyone: the industrial sites, the eFuels manufacturers, but above all – our climate.

By 2050, production costs of eFuels are expected to be between 0,70 EUR and 1,33 EUR per litre, according to a study by Prognos AG, the Fraunhofer Institute for Environmental, Safety and Energy Technology UMSICHT and the German Biomass Research Centre DBFZ. Of course, this also depends on the political framework conditions and signals to investors. Therefore, the cross-sectoral and widespread application of sustainable renewable fuels, including road transport, is vital to boost their large-scale production and reduce prices. This will also benefit hard-to-abate sectors such as maritime and aviation, where willingness to pay is much lower today.

In addition, a price increase at the petrol stations can be avoided, as only small quantities of eFuels are initially blended with conventional fuels. With increasing blending and higher production volumes, costs will fall due to economies of scale. This makes eFuels a socially just solution and offers affordable climate-neutral alternatives to fossil fuels for everyone. 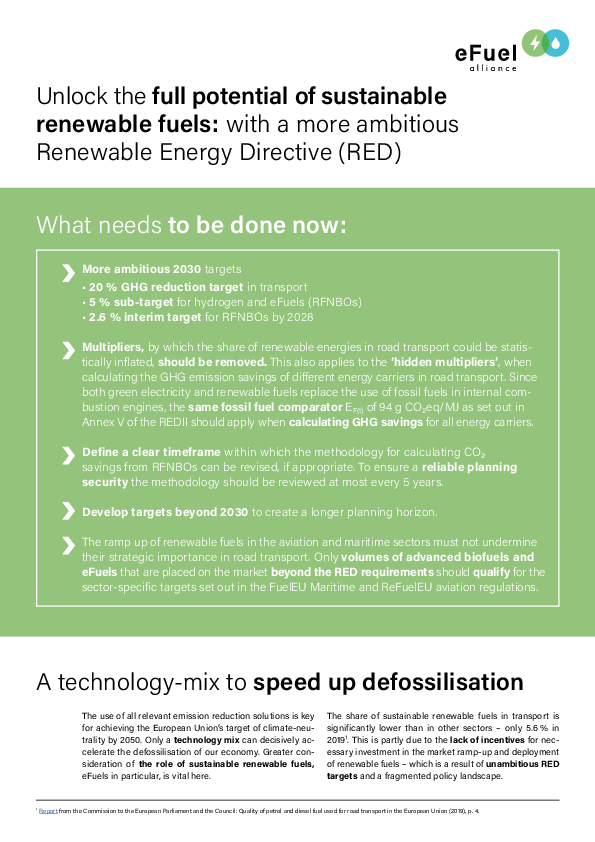 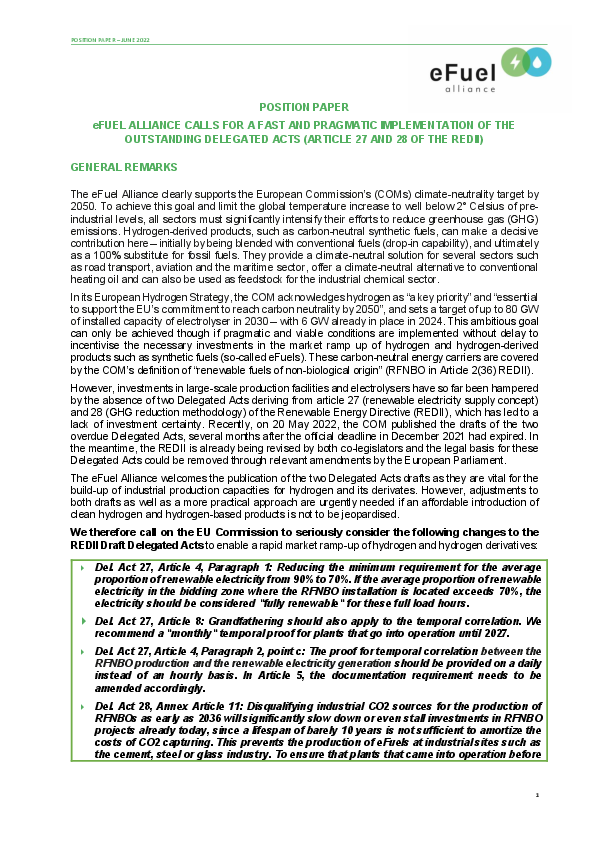 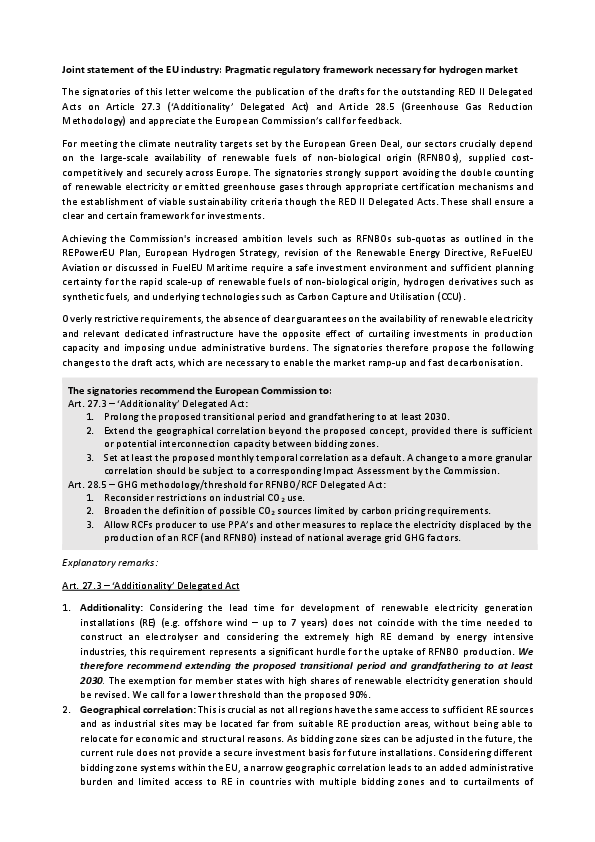 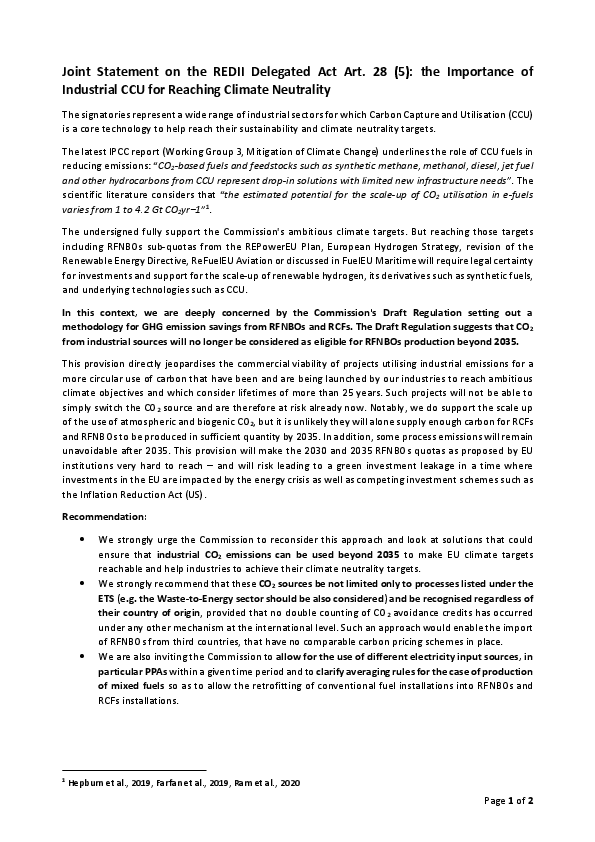 Joint Statement on the REDII Delegated Act Art. 28 (5): the Importance of Industrial CCU